Stecoah Baptist Church was organized Febuary 22, 1849. It was located on what was known as Meeting House Branch, near Ecola, now under the waters of Fontana Lake. The church has been located in several different places. The first church building was situated near the center of the community and also served as a school. Another building was struck by lightning. Still another building, located on a steep hill, was used for 25 years.

The present-day building was constructed on land donated by the Manoes Crisp heirs. Members volunteered their time, talent and money in the construction of this building. The rock work is a unique feature of this building. The first services in this building were held November 30, 1940 by pastor Jess Millsaps. The text was from 2nd Kings ninth chapter and the first song was "Amazing Grace". A prayer was led by John H Jenkins.

Many improvements have been made over the years, including stained glass windows, padded pews, a baptistry, Fellowship Hall and air conditioning. Another unique feature of the church is the Death Bell. The bell features a clapper on the outside of the bell, which gives a "tolling" effect. It has been rung in the past (one toll for each year of the deceased person's life). This was a common practice in the early years, but has declined in recent years. However, anyone wishing to have the bell used may request it.

Stecoah Baptist Church has certainly proven itself to be:

A SHELTER IN THE TIME OF STORM 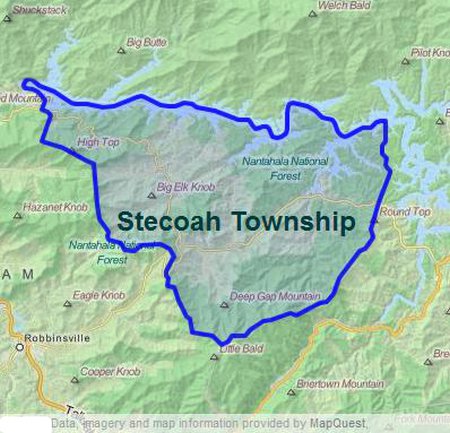 STECOAH BAPTIST CHURCH Located in Stecoah Township Graham County North Carolina Stecoah Baptist Church is affiliated with the Southern Baptist Convention. The fact that Jesus died for our sin, was buried, and then rose from the grave is foundational for Southern Baptists. He lives today and stands ready to give abundant and eternal life to all those who repent of sin and place their faith in Him. Southern Baptists invite everyone to receive Jesus Christ as Savior and Lord. We believe Love compels us to share the Good News of His love and extend the offer of his foregiveness with as many as possible.